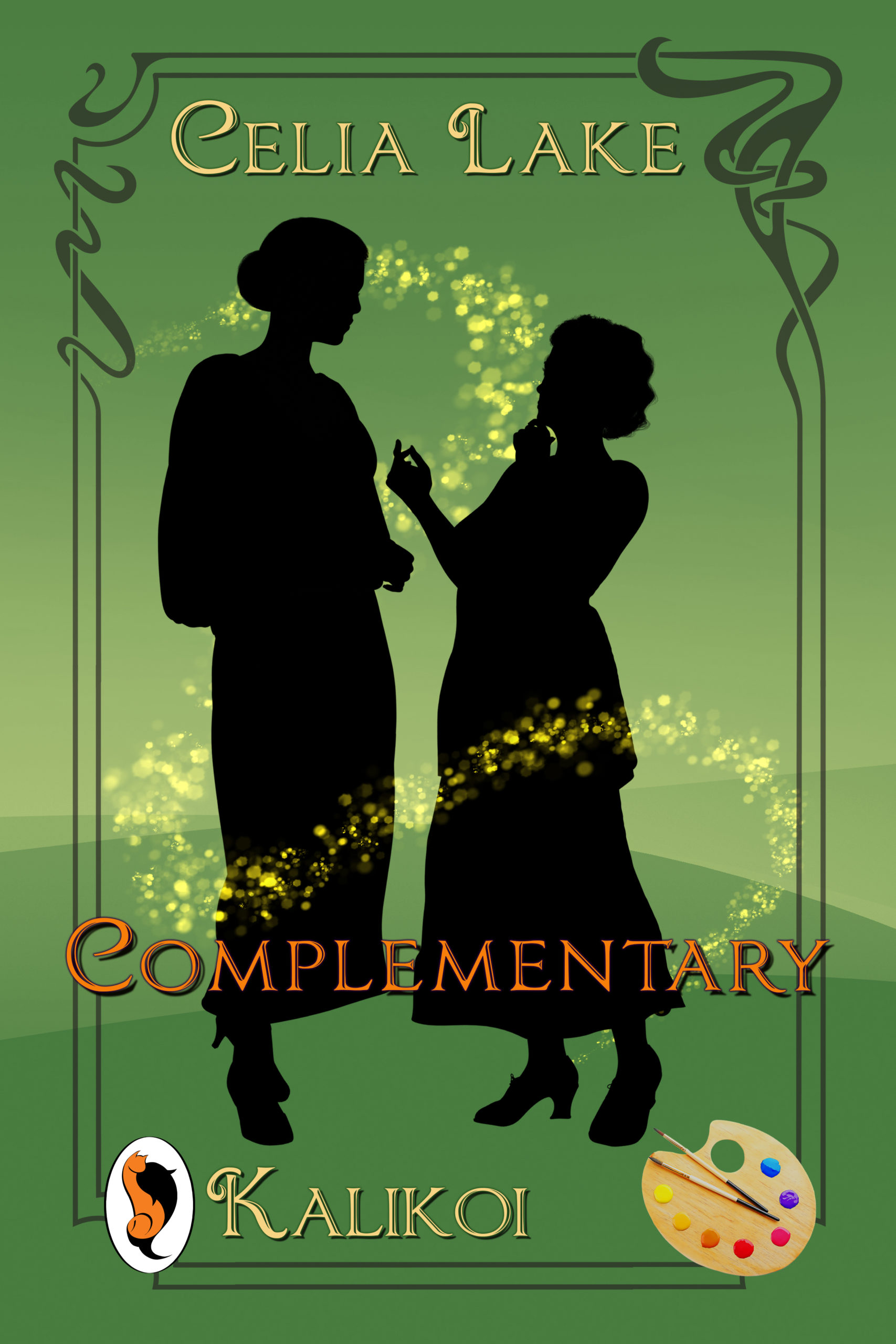 When a manor missing for centuries suddenly reappears in the middle of Oxfordshire, Giles is glad to take on the project. Figuring out magical puzzles and patterns is one of his specialities, after all. Blinded during the Great War, he knows he needs an assistant to help.  For her part, Kate can be relied on to do her duty without complaint but she quietly misses the greater range of duties she had during the war. Now, she isn't sure what to make of her new assignment. Or the fact she keeps failing at what Major Lefton expects of her.

If you’ve read more than a couple of my books, chances are that you’ve noticed a number of them have characters who are what we’d now describe as neurodiverse.

Neurodiversity is a term that encompasses a lot of conditions or experiences of how people think and interact with the world. They can include a wide range of things we have some names for, and plenty of things we don’t.  Some you’ve probably heard of include autism, ADHD or ADD, dyslexia, dyscalculia, or dyspraxia  Tourette’s Syndrome and some mental health conditions. Some estimates suggest that 30-40% of people fall into at least one of these categories (there can be overlaps, which make statistics harder…)

There’s also a huge range of experiences and ways this shows up for people. Each and every person has a unique brain and set of life experiences. All sorts of factors like family support or expectations, educational support, professional support and guidance (if testing and/or medication is part of the picture) make a difference in what it means for an individual.

We also know that while the term ‘neurodiversity’ is quite modern (it was coined in the late 1990s by Australian sociologist Judy Singer), that neurodiverse folks have been part of the world since, well, there were people.

For example, John Donvan and Caren Zucker wrote In a Different Key: The Story of Autism, a history of autism. As part of their research they discovered records from the mid-1800s that pretty clearly describe what we’d call autism today, and they talk about some earlier examples where there are less thorough notes.

One theory about why we see more people with these diagnoses or identifications these days is that modern society is a great deal more complex. Most people are asked – as part of ordinary daily life – to deal with a huge range of different situations and stimuli and expectations.

These include plenty of different noises (traffic, sirens, background music in every store ….), bright lights, dealing both with people who are well-known and a lot of total strangers (especially in the kind of work often open to people who are either still in school or are figuring out what they want to do with their lives.)

Modern life often expects us to reach a certain level of skill with a huge range of things, rather than being focused on a small number. Just think about all the skills someone needs to be competent in for a high school diploma – not just the subjects themselves, but technology skills, a certain amount of social skill (all those group projects…), and often many other non-academic expectations like community service.

It’s a big difference to the historical past. Even fifty years ago, many (though certainly not all) people might live much or all of their life in their home area or around people they’d mostly known from childhood. Even people who travelled or emigrated often did it in a context where they knew people with them, or where a situation was entirely new and challenging for everyone. Or it had some sort of structure to the expectations. In those cases, working through the situation could be more transparent and shared by everyone.

In addition, some people have an easier time than others of interacting in neurotypical society (or seeming to work with those expectations, anyway). Others have a much harder time. For people where the effort of doing so isn’t obvious, others may not realise what’s going on inside their head. They may only talk about it with a few close friends or family members. They might not talk about it much with anyone at all.

At this point, I’ve published five books that have neurodiverse characters. Three of them probably wouldn’t define themselves as being notably different from other people, but those experiences and how their minds work definitely shapes their interactions with the world and their stories.

On The Bias features Thomas Benton, who went into service in a great country house at age twelve. It’s clear from his comments several times in the book that he found the structure and clear expectations very reassuring. A country house ran rather like clockwork: each person had their set of duties and knew the expected standards they had to meet. Even the social interactions were laid out pretty clearly – who you socialised with below stairs, what you did on your afternoon off, what the next step in advancement would involve.

Benton eventually became a valet, and then was thrown into the chaos of the trenches of World War I. He did his best to become very competent at what he could control (he is, for example, extremely good at charms to heat up water – a comfort in the trenches.) Once he came into the sphere of Lord Geoffrey Carillon, there was someone he could look to (in a socially expected and structured way) for what he should be doing, and how to do it. At the same time, his attention to detail and a certain determined focus on his work meant he was a superb valet for an adventuring younger nobleman. He trusted Carillon would explain what was needed on the adventuring side, and then he set about making it happen.

Cadmus Michaels, in Seven Sisters is in somewhat of the same position. While he has his strong interests and his preferences for how things are done, he happened to be born into a life where those things fit with what was expected of him. Mostly. A man of his class and education is permitted a bit of eccentricity, after all. If the money is there, being a somewhat reclusive classicist is an entirely acceptable mould for a man. Even his time in the Colonial Service was largely expected, and a place where the needed skills and social expectations were well-known.

Gabe Edgarton in The Fossil Door is the exception in my list above. He – and his family – are quite clear his mind isn’t like most people’s. While Gabe doesn’t have a term like ADHD to work with, he knows he skitters around between ideas, that he’ll make startling choices. And he definitely should not be left entirely alone with his impulses without some moderating influence.

He was lucky enough to have parents who didn’t entirely understand how he thought, but who made sure he had the support to figure it out for himself. He didn’t go to tutoring school (common for people of his class and privilege). Instead various of the adults in his life made sure he got additional resources for learning. He bounces around too much from topic to topic to make friends easily, but in among people who also love the endless puzzle, he does fine. Better than fine.

Thesan Wain in Eclipse is possibly the character where it’s least obvious. When reading her point of view chapters, it becomes obvious that sometimes the world is too fast and too bright and too complicated for her to sort out right in the moment. Stars, her beloved field, are very far away and don’t generally move quickly at all. The others in her field tend to appreciate steady reliable work and a certain obsessive focus on detail.

However, if you were to ask her about it, I think she’d blink a lot. From inside her head, many of the things she struggles with are about issues of class, expectations she doesn’t fully understand (often related to class and social niceties), and the eternal question of dealing with widely varying students. That these things also are partly about neurodiversity, well… that’s why sorting this out gets complicated.

The last published work so far is Complementary, a novella about Elizabeth Mason, which makes it clear that she (like Gabe) is somewhere in this set of experiences. She is, perhaps, slightly less likely to fling herself out a window as a resolution to a problem. (Though compared to Gabe that’s not a high bar to get over.) But she is a tad impulsive, a very non-linear thinker and problem-solver, but capable of intensive focus. She’s also very used to working with people who tolerate or even admire her admittedly many quirks and preferences.

In Casting Nasturtiums, a novella due out in December 2021, Golshan Soltani also has what we’d call ADHD, and before that novella begins, has funnelled it into a mix of duelling, Materia training, and running a music hall with its endless challenges. When injuries during the Great War change what’s practical for him, he has to rearrange a whole lot of expectations about how to handle the bees in his head.

Why does this matter?

As with much of my other writing, I want to write books where people like me, like my friends and loved ones, get to have romance and love. Where they get to have adventures and come safely home. (And have a home that is safe to come to…)

That’s as true when we’re talking about how someone’s mind works as their body.

I owe many things to my editor, Kiya Nicoll (an author in their own right), who is also a long-time friend. But I especially owe them a lot of thanks for helping me figure out how to best show the neurodiversity of my characters on the page. And also for nudging me to write this post in part to highlight Thesan, in particular, as a model of neurodiversity that often goes unremarked.